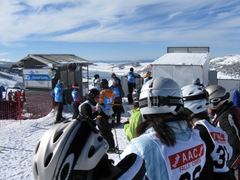 Joining a club like AAC Falls Creek is a significant commitment so we know you will want to be sure about us. The Club needs to be confident that you will fit in too.

If you are thinking of joining a snowsports club and are visiting Falls Creek, why not arrange to look around the Australian Alpine Club lodge?

Andrew, our lodge manager, would love to show you around. Just call him on 0407 342 668 to arrange a convenient time.

Bookings are made using the online booking system or the Booking Form. You will find information about making bookings on the "Book" tab of this website, and in the booking information sheet that is sent to members annually.

Members accommodation rates are low and include linen and a hot cooked breakfast in peak Winter time.

Any tme is a good time to meet other members in the lodge, but Race Weekend at the start of August is a particularly good opportunity. This involves a fun race suitable for intermediate and advanced skiers & boarders, and a catered dinner in the lodge. It's a great chance to get to know other members.

Annual Subscriptions are paid each year with accommodation vouchers offered to full members who pay on time.

AAC Falls Creek also encourages children of members to join the club. Juniors are not required to pay the full sum until they reach 25 years of age. There are different costs for under 18 and 18-25 years old groupings. Debentures are not issued until Juniors become full members at 25.