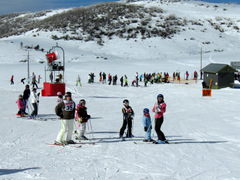 Gone But Not Forgotten

The Club would like to recognise the passing of several members who were integral to AAC's establishment.

Bryan was the founding board member and long serving chairman of the Australian Alpine Club Dinner Plain. Devoted husband of Peg (dec). Dearly loved father of Jan, Sandy and Andrea, and father-in-law to Gilles and Michael. Beloved Papa to Emilie, Camilla and Tom; Justin and James; Charlotte, Amelia and Phoebe; and their partners. Papa Bryan to Harley, Bastien, Isabelle, Lily, Penny, Sienna and Oliver. Loving partner of Barbara.

Recognised by everyone as a true Gentleman, Bryan’s vision, wisdom and dedication made the Lodge at Dinner Plain a reality.

Clive had a life-long love of skiing and the Australian alpine regions, starting when he was at university in the 1940’s when there were only rudimentary lift systems for skiers, and provisions had to be carried into many Australian resorts on horseback. Clive and his wife Elspeth joined the AAC in the 1970’s and were among the original members of the Club. He and his family stayed at the AAC for many winter skiing holidays and also spent time at Falls Creek during Easter and summer breaks for hiking and bushwalking.

Clive and Elspeth enjoyed the friendships they made through the AAC with families such as the Camerons, Marshalls and Pitts.

Clive is survived by Elspeth and his children John, Katrina, and Andrew who are all members of AAC.

Critical to the establishment of the AAC Falls Creek Lodge, Don was one of five people who provided a personal bank guarantee to shore up the funding which enabled the construction of the Lodge we now have at Falls Creek, which was built in 1970. At that same time, Don joined up his three children Lynne, John and Jenny to help with the funding, despite them having never skied.

Don passed his membership onto his granddaughter, Mel who remains a Member of AAC Falls Creek today.